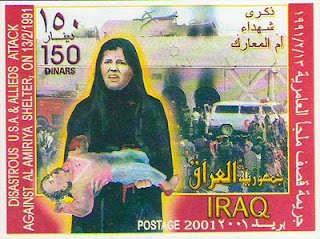 A woman cradles her dead child outside the wreckage of a Baghdad civilian air-raid shelter targeted by the US Air force during the "First Gulf War" in 1991, on this stamp issued by the Republic of Iraq on the tenth anniversary of the tragedy in 2001. Over 400 civilians, mostly women and children, were killed in the attack on the Al-Amiriya shelter, which was deliberately and not accidentally bombed. Puts 9/11 in a little perspective, doesn't it?

(My headline refers to the 1942 Greer Garson film Mrs. Miniver which tells the story of an English family in the early days of World War 2 as their town is bombed by the Luftwaffe. I would love to make a remake of this film set in Iraq.)