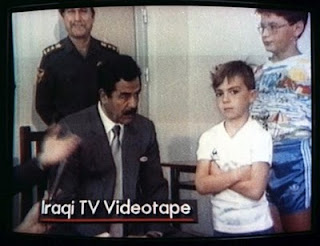 'Mistreated' Americans Win $400 Million Settlement Against Iraq
ravaged Iraq has agreed to pay $400 million to a group of Americans who say they were traumatized or tortured during Saddam Hussein's rule after the 1990 invasion of Kuwait. What's so unfair about that? Oh, right. An agreement was signed last week that would settle up to eight groups of claims against Iraq, and help lift decades-old UN sanctions. Meanwhile, Iraqis barely have electricity, are still fighting an insurgency, and, frankly, the country is a little strapped for cash these days. So where will this money come from, and who will get it?
The claims include compensation for emotional distress from the children of two contractors seized near the Iraq-Kuwait border in 1990, Americans held as human shields in an effort to prevent a US attack, and the case of CBS News reporter Bob Simon and his cameraman who were held after being arrested along the border with Kuwait. 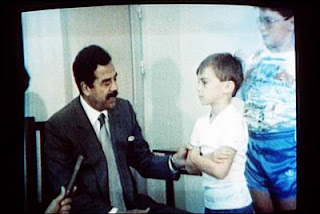 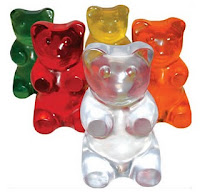 وقد استلمها الجنود ووزعت في مناسبات عديدة على الأطفال في العراق.
++
تعليق: بغض النظر عن خطر هذا النوع من الحلويات على الأطفال سواء بسبب الالوان الصناعية او بسبب مادة الجيلاتين المستخدمة ، لا ادري لماذا تعتقد قوات الاحتلال أنه من المناسب قتل الآباء والأمهات وتهديم المنازل على رؤوس سكانها ، وتدمير البنى التحتية في البلاد و نشر الامراض والجوع والفقر والخوف ، ثم بعد كل هذا شراء حب أطفال العراق بالجيلاتين الملون ! أية عقلية مريضة هذه ؟!
http://ishtar-enana.blogspot.com/2010/09/blog-post_25.html
Legion sends yummies to Iraq
By AUDREY PARENTE, Staff writer
September 23, 2010
NEW SMYRNA BEACH -- Nearly 4,000 Gummy Bears descended on Iraq recently to help build good relations between the remaining American troops and some of the country's children.
The unusual bit of peacekeeping came about because of a group effort at American Legion Post 17 in New Smyrna Beach.
The sticky sweets arrived at Post 17 from Terre Haute, Ind., this summer, where local Legion member Kimberly Murphy visited a CVS store while vacationing.
"While chattering away with my mom about a recent poker run that we had participated in, to raise money for phone cards to send to troops serving in Iraq, the manager spoke up...'Oh do you do that?' " Murphy said.
The CVS manager offered her the 4,000 bags of Gummy Bears.
"Apparently they had taken up some sort of a collection for something else and they had these left over," Murphy said. "My response was, 'Are you serious; that would be great.' "
Murphy had flown to Terre Haute and couldn't get the mountain of confections home.
"But my dad was coming down the week after I got home, so he brought them down," said Murphy, who served in the Army at Fort Jackson, S.C., during the early 1980s.
At Post 17, Cmdr. Thomas C. Kelly said Legionnaires, auxiliary members and Sons of the American Legion pitched in. Efforts included a cash donation for shipping from the Politis Law Firm of Port Orange.
"All I needed to do was call a few people, and they liked the idea so much it went in the right direction," Kelly said.
Volunteers turned up to pack, including longtime New Smyrna Beach resident U.S. Rep. Suzanne Kosmas.
"It was especially heartwarming to see young people and their parents who are making a tangible contribution to the well-being and appreciation of our troops," Kosmas said. "The kids were having a real good time, making up songs and poems and enjoying knowing they would get to our war-fighters on the other end."
Legion member Jules Bunel of New Smyrna Beach helped.
"It gave me a sense of something positive that we were able to take part in," Bunel said. "I felt proud we were doing something for troops in harm's way."
"One member had a friend who was a colonel in Vietnam and the daughter was in Iraq," Kelly said.
Army 1st Sgt. Mary D. Hampton of Army Alpha Company, out of the Airborne Division at Fort Bragg, N.C., serving in Iraq, said she would take delivery.
"Our mission is to support the First Advise and Assist Brigade, 3rd Infantry Division with all classes of supply and the distribution across main and alternate supply lines," Hampton said via e-mail. "My soldiers receive and load all supplies such as water, fuel, food, ice, medical equipment, ammunition and repair parts. We secure our own convoys and deliver to the smaller bases throughout the Baghdad Province."
She agreed to get the candy on a convoy heading for distribution to Iraqi children as part of a medical mission.
"The Gummy Bears were handed out to the Iraqis at a few different events," Hampton said.
On one humanitarian assistance mission, "take away bags" included toys, school supplies, clothing and the candies, she said. Another event was a Civil Medical Engagement, where medical aid and preventive medicine guidance and assistance was offered, and the candy was given away to the patients.
http://www.news-journalonline.com/news/local/southeast-volusia/2010/09/23/legion-sends-yummies-to-iraq.html
مرسلة بواسطة سحاب Sahab في 1:57 م