Genocide in Iraq: The Case Against the Un Security Council and Member States 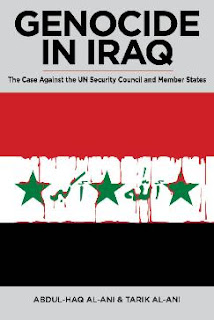 The bombs penetrated the meter-deep layer of earth, passed through one meter of reinforced concrete slab, through the top floor and through another meter of reinforced concrete floor slab to the lower floor. The impact of the bomb caused all the water, fuel tanks and boiler to explode, filling the lower floor with a mixture of boiling water and fuel to a depth of two meters. All the medical staff were killed instantly and the emergency power supply was destroyed, rendering all life-supporting systems inoperative. On the top floor the bomb generated a tremendous heat estimated to have reached some 4000 degrees. The people were incinerated. At the time of the attack there were over 1500 civilians in the shelter. Out of those people only 11 persons are known to have survived after suffering different degrees of wounds, burns and psychological trauma. Whole families were wiped out, as could be seen afterwards from their locked houses in Amiriya. The bodies of the medical staff were found floating in the water-fuel mixture of the lower floor. The caretakers of the shelter claim that the black, burnt walls still have human skin and flesh stuck to them