Al-Amiriya Centre for Documentation and International Initiatives, Madrid
Concerning the Crimes of Genocide, War Crimes and Crimes against Humanity committed by the USA and its allies against the people of Iraq
September, 2001 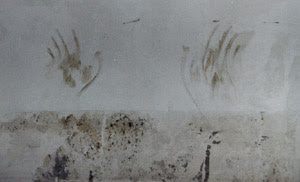 Hands traces of Al Amiriya refugee victims branded in the walls. In this cruel attack of US Air Force 403 Iraqi civilians were killed, 142 of whom were children under ten years old

Documents, links:
The secret behind the sanctions: how the U.S. intentionally destroyed Iraq's water supplyAuthor: Thomas J. Nagy (The Progressive)Date: September 2001
The humanitarian situation in Iraq, the humanitarian program 'Oil for Food', and Human RightsAuthor: Jutta BurghardtDate: July 2001
Memorándum on the humanitarian emergency and threat to peace resulting from the Security Council's sanctions policy vis-à-vis Iraq, on the efforts to establish a régime of so-called "smart sanctions," on the continued violation of Iraqi sovereignty by permanent members of the Security Council, on the unilateral threat of the use of force against Iraq, and on the special responsibility of the international community to uphold the principles of the United Nations Charter and to avert armed aggression against IraqInternational Progress OrganizationDate: February 2002