The Battle for Hearts and Minds

The Amiriyah shelter in a middle class Baghdad neighborhood
After several weeks of air war, the emphasis declined on attacking Baghdad and leadership sites. Saddam Hussein was still very much alive and the unanticipated mission of preventing Scud missile attacks on Israel forced a rewriting of the script. Other priorities also intruded on the leadership focus, such as new intelligence on Iraq's weapons of mass destruction .
The Amiriyah shelter, known as the Al Firdos C3 bunker to U.S. war planners, was added to the target list in early February as a newly activated Iraqi command shelter. Signals traffic and daytime satellite photography of limousines and trucks parked outside suggested "leadership" activity.

Looking out the roof of the darkened Amiriyah shelter.

The shelter was bombed in the early morning hours of Feb. 13. A pair of stealth fighters expertly dropped two 2,000-lb. laser-guided bombs on the hardened shelter, piercing the concrete steel reinforced roof.
Unexpectedly hundreds of Iraqi civilians, possibly the families of elite government and intelligence personnel, were using the shelter as a refuge to escape nighttime bombing. About 400 Iraqi civilians, mostly women and children, died in the attack. Another 200 were injured severely. U.S. intelligence never detected the civilian presence and still believes the shelter was used (at least during the day) by Iraq's intelligence agencies as a back-up communications post.
U.S. leaders scrambled to explain the attack. Generals Schwarzkopf and Powell conferred and the air war planning office in Riyadh was ordered to get approval for any subsequent downtown targets selected for attack.

In September 1991 I had occasion to visit a twin of the Al Firdos bunker, another Baghdad civil defense shelter that was on the target list but went unbombed after the Amiriyah disaster. It appeared to be a typical civil defense facility, built to NATO specifications and filled with bunk beds and pool tables, hardened in anticipation of an Israeli or Iranian attack on the capital. 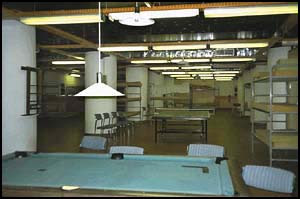 The interior of the unbombed twin to the Amiriyah shelter