Chilling memories of US mass murder 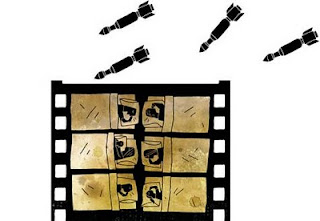 It was 4.30 in the morning on February 13 1991, when the pilots of two stealth bombers released their deadly cargo.
Image Credit: Illustration: Luis Vazquez/Gulf News

February 13 marked 19 years since the US bombing of Baghdad's two-storey Al Amiriya bomb shelter when 480 civilians were literally incinerated by two American 2,000 pound laser-guided "smart bombs", designed to penetrate multiple layers of concrete. Most of the victims were Iraqi, but there were also a number of Syrians, Jordanians, Palestinians and Egyptians who were consumed by the blasts.
It was 4.30 in the morning on February 13 1991, when the pilots of two stealth bombers released their deadly cargo. Until then, the women, children and elderly inside had felt they were safe in the purpose-built facility designed to protect against nuclear attack — and equipped with bunk beds, televisions, bathrooms, kitchens and a clinic. Their spirits were high after celebrating Eid Al Fitr the previous evening, but some were worried about fathers, brothers and husbands who had remained in their homes to ensure that there was enough room in the shelter for their loved ones.
In the event, their own lives were tragically cut short. Those sheltering on the upper floor were burnt to death; in some instances their silhouettes — carbonised by high temperatures — were eerily seared onto the walls, including that of a woman clutching onto her baby. Most of those in the lower hall were killed by boiling water that gushed from the shelter's two enormous water tanks following the impact of the bombs.
Only 14 survived, but they could hardly be considered the lucky ones since the majority sustained terrible injuries from the blasts. Rescuers who rushed to the scene were frustrated by a lack of electricity to power their equipment and a thick steel door that was so hot it was glowing. All they could do was listen to the screams and the cries of the dying.
The US government initially claimed that it had received intelligence reports that the bunker was not a civilian shelter, but one of Saddam Hussain's military command centres.
However, the US Department of Defence later admitted that they knew the facility had previously been used for civil defence purposes. No evidence that the site had been used by the military was ever found, but that didn't deter the White House from accusing Saddam of using "select civilians" as a cover for the facility's true mission. Like many other US accusations this turned out to be untrue.
Today, Al Amiriya shelter stands as a monument to the dead; its walls adorned with photographs of victims, commemoratory brass plaques, prayers and flowers. Visitors who must steel their emotions before entering often emerge traumatised. Writing about the experience Na'eem Jeenah relates: "A feeling of revulsion and disgust towards these creatures we call human beings and for the ease with which we allow ourselves to become less than human."
Ebrahim Alloush says anyone with "one tenth of a heart and one per cent of a conscience will shake with rage and anguish as they try to hold back the tears".
Outside Iraq and the Middle East, the story of Al Amiriya was soon forgotten as the world celebrated St Valentine's Day just hours after the attack. Now, a young Moroccan-born French filmmaker based in Dubai is determined to keep alive the memories of those who died such a terrible death.
Fervent hope
For her first short film Faces of Wrath that focused on the horrors in Gaza, Siham Jouhari received an award from Al Jazeera's fifth International Documentary Film Festival 2009 in the category ‘New Horizon'. It is her fervent hope that her second — and much more ambitious — film Al Amiraya: The Shelter will be completed in time to commemorate the 20th anniversary of the Al Amiriya tragedy.
The script is a simple, uncomplicated yet poignant account of real people who lost those they cared for most, such as Abu Ali and his wife Saoussan who were robbed of their four children. It also recounts the story of a taxi driver Yousuf who lost his entire family, save one son, and Ahmad, a young man in love, whose burns were so severe that he had to be sent abroad for treatment, but who never stops searching for his beautiful childhood sweetheart Bouchra.
We will never know what extraordinary accomplishments these ordinary people could have achieved had they been allowed to continue with their lives, but they deserve to be acknowledged and remembered — firstly, as a reminder to mankind to never again sink to such depths and, secondly, to honour their memories and the memories of all the innocent victims of Iraq.
For some, Al Amiraya: the Shelter may be hard to watch, but its essence is one of hope and courage. Those of us who are appalled at the callous way big powers write-off innocent deaths as "collateral damage" can only wish Jouhari well with her respectful and loving mission to ensure that there's one American valentine signed in blood that we must never ever forget.