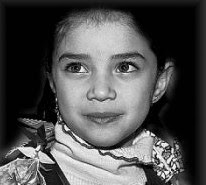 An Iraqi girl. This picture is not a picture of anIraqi girl who was in the shelter at the time of the bombings, but could have been. It is a surrogate face of children who no longerhave one. 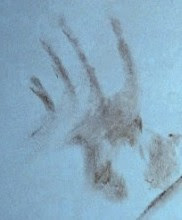 A child's handburned into the
when during the Gulf War, on 13 February 1991, at 4:30 in the morning, the Amiriyah shelter (also spelled Amiriya, Amariya, Amariyah) was hit by two laser guided bombs.
From the outside, the Amiriyah bomb shelter appears as a large, single story blockhouse made from concrete. The Iraqi government had built forty-four of these shelters around the city. They were designed to withstand a nuclear blast, but they were no match for the American laser guided bombs.
The Amiriyah shelter is located in a poor, working-class neighborhood made up mostly of apartments. There are no nearby military facilities. There is a school across the street. 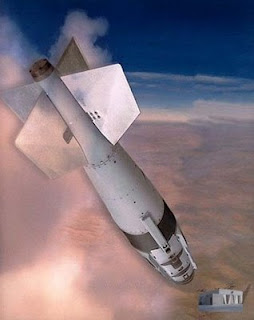 but they were no match for the American laserg 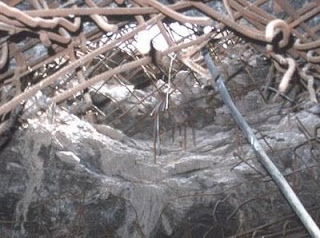 uided bombs ...
Entry point of the guided bomb into the Amiriyah shelter.
Inside of the shelter, there is the large, circular hole in the ceiling where the first bomb came through. Underneath, there is a huge crater in the concrete floor. In the shelter there were no adult males--only four-hundred and eight human beings - women with their children. At 4:30 in the morning, most of the victims were sleeping in bunk-beds stacked along the walls. The first 2,000 pound bomb carried a shaped charge that cut through 12 feet of reinforced concrete and exploded, peeling away the protective cover
Neighborhood residents heard screams as people tried to get out of the shelter. Shortly afterwards, the second bomb passed through the hole made by the first bomb. The explosion from the second bomb shattered doors and windows in homes around the neighborhood. The screaming abruptly stopped. The flash of the explosion was hot enough to sear foot- and handprints to the walls. Combustible articles--hair, clothes, blankets--caught on fire. When the rescuers opened the doors to the shelter, they saw scenes of incredible carnage. Nearly all the bodies were charred into blackness.
U.S. officials claimed that the blockhouse was a military communications center, but Western reporters have been unable to find evidence for this. Jeremy Bowen, a BBC correspondent, was one of the first television reporters on the scene. Bowen was given access to the site and did not find evidence of military use. [BBC 1, February 14, 1991].
http://www.visualstatistics.net/East-West/Amiriyah/Amiriyah.htm
مرسلة بواسطة سحاب Sahab في 9:39 م