Mr. Habib’s real name was Mr. Khader. He lost half his large family, his wife and all his daughters, when the Pentagon bombed the Al-Amriyah shelter

Meeting Mr. Habib
By Joyce Chediac
Have you met Mr. Habib?
Mr. Habib, his wife and son are the only people of color in the blockbuster movie hit “Father of the Bride II.”  Many people have met him.
They do not like him.
Mr. Habib is very rich.  He wears a shiny suit.  He flashes a phony smile.  He talks in a thick Middle Eastern accent.  Mr. Habib smokes cigarettes with his thumb and forefinger, then puts them out on other people’s lawns.
Mrs. Habib does not speak; Mr. Habib speaks for her.  When she tries to speak he yells at her.  His son does not even try to speak.


Maybe you’ve met Mr. Habib and just don’t know it.
Perhaps the small brown man who buses your dishes at the corner coffee shop is Mr. Habib from Yemen.  Maybe you thought he was Latin.  That might be just fine with him.  When you glance in his direction he doesn’t meet your eye.  He is afraid to get to know Americans.  He does not have a green card and does not want to take any chances.
Did you notice that he always seems to be in the restaurant, no matter what time you are there?  Young Yemenis without papers have little choice but to work at below minimum wage, 12 hours a day, six or seven days a week bussing dishes or lifting boxes in supermarkets.  They can survive only by living dormitory style, 10 young men to a tiny apartment.
This Mr. Habib lives for the day every 2 or 3 years when he can afford to go home with a big splash, bring presents for all.  But then he must return to the loneliness of his dormitory and a life elbow deep in other people’s table scraps.
Mr. Habib may be the Lebanese merchant who runs the candy store where you buy your daily paper.  He may be polite, courteous. His nationality may not seem important to you, and you man not ask.
And he may not volunteer it, not wanting to look for trouble.  After all, it was just the other day (Sunday, Feb. 18) that he handed you the Daily News with the 3-inch high type reading: “NY Nuke threat: Probe reveals FBI fear of Iranian Terror Scheme.”  When such headlines appear, every person who could be described as “Middle Eastern-Looking” feels the racist shock waves.  Maybe you would stop talking to him, stop coming to his shop, or even physically attack him if you know he was Arab, he thinks.
Dena is eight years old.  He is an active kid, always in motion.  He met Mr. Habib in May 1991.  So did his mom, Sara, who is my friend.  They are not likely to forget. 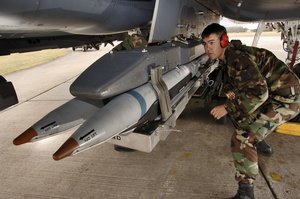 Mr. Habib’s real name was Mr. Khader.  He lost half his large family, his wife and all his daughters, when the Pentagon bombed the Al-Amriyah shelter in Baghdad during the Gulf War.  Afterwards, Mr. Khader traveled to New York to testify at an international tribunal convened to investigate U.s. war crimes during that war.
Testimony by an American fact-finding team, contained in “War Crimes: A report on United States War Crimes Against Iraq” (Maisonneuve Press, Washington 1992) gives their impression of what happened to Mr. Khader’s community:
“We visited  Al-Amriyah shelter that was destroyed by two bombs in February 1991.  You could smell death inside and envision the terror and panic of people unable to get out.  One side of the shelter was a school, on the other a supermarket.  Estimates of those killed on the night it was bombed—the majority of them women and children—range as high as 1,500 people.  Only 11 survived, many of them severely burned.
“All through the surrounding completely residential neighborhood banners were hung outside of homes listing family members who died.  One banner named 17 dead.  We met in their homes with surviving family members who seemed to be still in shock.  Once school had resumed, some classes had lost half their students.  Outside the shelter, women still mourned at the gates for loved ones whose bodies had never been recovered or identified.
“The Bush administration and media had said they thought this was a military bunker.  Anyone spending five honest minutes in this neighborhood would know that this was untrue.  Many expressed to us that this was a deliberate bombing to terrorize the population.”
I was there on Feb. 29, 1009, when Mr. Khader described the Al-Amriyah bombing before 1,000 people and media from around the world.  In a calm and measured voice, he just told what happened, what he and his community lost.  He was a gentle and dignified man with a private grief.  The impact of his words were made all the more moving by his quiet demeanor.
Mr. Khader was swamped by international media as he stepped off the stage, but not, I noticed, by U.S. media.  While Japanese and German networks climbed over each other to position their microphones, the major U.s. networks had not even come to the tribunal.  Mr. Khader’s quote was not solicited by the New York Times.
Dena and his mom were close by.  Sara, with Dena in tow, volunteered to assist Mr. Khader, to chauffer him, take him to receptions.  But somehow the rules got switched. Mr. Khader became Sara’s assistant and 3-year-old Dena’s caregiver.  When the three were together, Dena could most often be found in Mr. Khader’s arms.  They became attached at the hip, so to speak.
When Sara drove Mr. Khader to the airport for his return trip, it was hard for him and Dena to part.  Mr. Khader was returning to a country with food and water shortages, and clearly needed all his resources.  Yet this Iraqi man insisted on buying Dena a gift.  It was a toy Pan Am jet, which, purchased at the airport, cost ten times more than in a discount toy store.
Dena still has the plane, along with a post card, a letter, and warm memories of Mr. Khader.  Sara still tells how one small boy helped ease the unspoken and unspeakable pain of one dignified man.  And how this man, so generous in spirit, was able to accept comfort and healing from a child living under the very government that took his own children from him.
The story of Dena, Sara and Mr. Khader is the true story of a real Mr. Habib and his interaction with an American family.  But no big-time producers have lined up to buy the film rights.
After Mr. Khader testified at the tribunal, he went home to others who would sit with his grief, and theirs.  He went back to a community that knew his pain and would whisper “habib.”
In Arabic, “habib” is more than a name.  It is a term of endearment—habib, ya habibi, ya habiba—beloved, sweetheart, dear friend, my child.  Mr. Khader might have called Dena “habib.”
What happens if “habib” urns from an endearment into an embarrassing word in an odd, shameful language?
What if the truth is never told?  What if it is ridiculed, demeaned or ignored?  What if it is burned out of the head, turned to dust before the telling?
Racism kills in many ways.
There are the ovens and firing squads of the Nazis.  There is the rope, torch and club of the Ku Klux Klan.  There is the whistle and bang of the twin bombs dropped n Al-Amriyah.
But there is also the slow poisoning of the spirit, the deadly numbing of the heart, reducing the most profound and personal experiences to dirt, ash, or even worse, nothing at all.
Mr. Habib must have his voice. He is entitled to his truth.  And others deserve to know what really happens to him.
Taft Betries, Tofiq Chediac, ya habibi, Mr. Habib—this telling is for you.
Posted 10/1/01
مرسلة بواسطة سحاب Sahab في 7:18 م