Iraq: Scandals of the Occupation By Muntazir Al-Zaydi 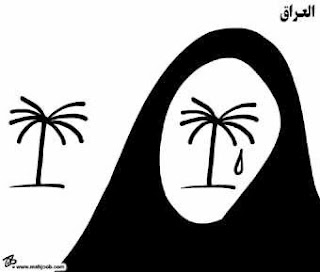 A thief running away with what he has stolen spilling out of his pockets can hide from the eyes of others, but the darkness of the night does not last long. When the first ray of the sun of freedom shines, the ugly face of America will be revealed.
That face had taken over our minds with the high idealism and legendary morals that we see in Hollywood films. The Yankee has revealed his colonialist roots — the genes he inherited from his forefathers, who occupied the American continent and exterminated its population of American Indians so that they could blot out the truth later. At the time, they had a monopoly over the media, through which they portrayed the American Indians as barbaric, brutal, frightening, treacherous and cowardly. On the other hand, the (light-colored) European invader could repel an attack by an entire Apache Indian tribe with a pistol loaded with only eight bullets. Thus, we believed these lies while we followed the Hollywood films. We also believed in the noble nature of the purpose, which was to bring civilization to semi-primitive people.
However, allegations about the real America emerged after the first rocket hit the Amiriya shelter in 1991, killing hundreds of civilians who had been sheltered inside. Following this, smart bombs began to pound vital national infrastructure in Iraq; and we soon entered a dark cave to ride out the siege which lasted 13 years. This dreaded siege cost us the lives of a million children. Iraq became a ghost town where moans and the wails of hunger are heard throughout the night.
The bombs that fell on Baghdad in 2003 did not escape the Iraqis’ notice. Nor have they forgotten them. After this began the process of effectively occupying Iraq. Thus, the Iraqis found the Yankee in their country for the first time, preaching so-called democracy! Soon, Iraq became an occupied country, and hardly a day passes without a heinous crime or a violation of sanctity or human rights.
The same thing applies to the other occupied country (Afghanistan), which is Iraq’s twin in terms of suffering occupation and similar ordeals. The American troops dealt with the populations of Iraq and Afghanistan as if they were bodies without souls, a nickname used by religious Americans for the people of Mexico. Our bodies became test dummies for their weapons and were used for target practice. Whether it is live bullets on people or urine on corpses (as we recently saw on television, which has been showing the crimes of the occupation because the media is no longer the domain only of Zionist organizations and America), we see and hear about crimes that are a disgrace to humanity day after day.
What saddened me and millions of other Arab and Islamic people, as well as humanity in general, was history repeating itself, and the occupier killing and being saved from punishment as long as the ones being killed have colored skin! As long as those killed were not American, the punishment was limited to a reprimand, denial of leave or demotion from sergeant to solider! These were the punishments for the hundreds if not thousands of lives that had been taken by American arrogance and military vileness. In an earlier case that made the Arab people hate America and those who go along with her, the court acquitted the criminal soldier Frank Wuterich. He was accused of a recent massacre which killed 25 Iraqis, among them women and children, when he threw grenades at safe houses in response to the killing of one of his colleagues by the Iraqi resistance. He was acquitted after pleading guilty as part of a deal with military prosecutors, and he received a 90-day suspended prison sentence. Also, the Iraqi government paid $104 million to the families of two who had fallen victim to the bombings of 9/11. An American judge approved said compensation to come from frozen Iraqi assets, basing his judgment on a statement from former Secretary of State Colin Powell that there had been a link between al-Qaida and the previous Iraqi regime. Last year, the Iraqi parliament voted for a resolution to compensate American families with up to $400 million; and the reason for this was that the Iraqi government detained them and threatened to use them as human shields!
The problem is not with the cart but with the horse that is drawing it! The Iraqi politicians have failed to value the blood of the Iraqis — to the point where the president and the prime minister have gone in succession and laid flowers on the graves of the murderous soldiers of the occupation. Meanwhile, neither of them bothered to visit any of the families of the martyrs who were killed by bullets from the occupation.
How much time do we need in order to learn that politics in Iraq is the art of kissing America’s hands while cutting off those of Iraq? How long must we grind our teeth in anger as we hear, on a daily basis, of new scandals perpetrated by American soldiers with us as the victims? And if we have no value to those who harm us by defending tyranny against the Iraqi people, can we expect mercy from the colonizer who is unconcerned about spilling our blood? What if it had been Iraq that killed an American family? And what would happen if an Afghan citizen urinated on the corpse of an American tourist who he had killed in cold blood? And what would happen if al-Maliki demonstrated his eagerness to punish the occupying soldiers with the same enthusiasm he expressed for detaining the vice president of the republic?
مرسلة بواسطة سحاب Sahab في 11:50 ص