I do not think enough people know about this: The Amiriyah Shelter Massacre. (self.reddit.com)
submitted 1 month ago by Baghdadification to reddit.com
I visited this shelter while living in Baghdad, around 2002. I was still in school back then and it was a school trip (mind you, it was the Baghdad International School, which was a UN school - not a propaganda trip.)
Of course, there weren't any bodies lying around or anything. However, you could see the silhouettes of people who were burned alive against the walls; what I will never forget was the frame of a mother holding her child, and a pair of handprints. The silhouettes were the melted skin of the victims.
In total, over 400 people died in this shelter. Nearly all of those people were women and children.
I found a couple of videos on youtube (1 - 2) with pictures. I warn you though, these are partly very graphic. Also, someone started a blog with a description of what happened.
As an Iraqi, I'm not asking for sympathy or pity. I just want you to see what happened in Iraq even in 1991, which is nothing compared to what is happening in Iraq since 2003.
Thanks. 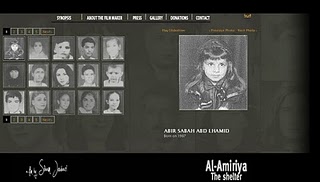 MIX MAX
Monday, March 15, 2010
Al Amiriya Shelter - Documentary
I received an email from Sahab bringing my attention to Al-Amiriya: The Shelter.
Sahab, for those who still don't know is one of few committed and honorable people around documenting and showing the truth about atrocities too place against the Iraqi people, focusing on the shelters of death, one of these shelters is Al Amiriya - first time I wrote about this tragedy was last year, then I wrote about the interview Al Baghdadia channel conducted with families of victims.
The documentary is made by Siham Jouhari, a French flim maker of Morrocan origin, known for the award winning short movie “Faces of wrath”, about the war on Gaza in 2009.
I took a look at the website but could not find any news or a source to the movie.
Anyone knows about the movie, please let me know.
http://iraqthelastinglove.blogspot.com/2010/03/al-amiriya-shelter-documentary.html
MIXMAX SAY

What is most interesting on this blog is the the contrasts and combination between the politics of yesterday and the politics of today, both pour in the same jar: the suffering of the Iraqi peopleGreat blog. I checked you other two blogs and I have none but my compliments and admiration to the effort you are doing in documenting everything related to these issues. 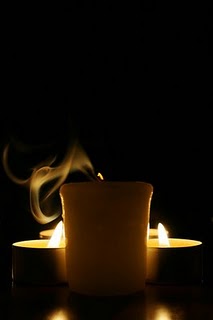 there is a exclusive blog (in Arabic and English) on the tragedy, can found here to commemorate the victims of Al Amiriya Shelter. It is by a blogger under the name Sahab, who also created another blog about the children from al Hanan orphanage. It contains many pictures and videos, In addition, in 2001 a research center has been established in Madrid, Spain named after the doomed site i.e. Al Amiriya Center for Documentation and International Initiatives, that deals with the autrocities committed by U.S. forces during that war (they seems to fail to foresee the future and the events followed 2003 and until now).God bless the souls of Al Amiriya Shelter vicitims, and may they rest in peace, forever and ever.
http://iraqthelastinglove.blogspot.com/2009/02/al-amiriya-shelter.html
The Polynational WAR Memorial
First Gulf War
MEMORIALS
AL-AMIRIYAH SHELTER MEMORIAL
Type: Physical memorial
ملجأ العامرية :Alternative name
Location: Baghdad
Country: Iraq
After 1991 the shelter was turned into a memorial. The blog http://alamriya.blogspot.com/ is devoted to this event and has published several images from the memorial. The Japanese online magazine The Shugoku Shimbun has also published some images in this article about the event.
POSTED BY JON BRUNBERG ON 2005-09-22
http://war-memorial.net/Al-amiriyah-Shelter-Memorial-1.73
مرسلة بواسطة سحاب Sahab في 8:08 م