This Day In History February 13 , Today over twenty years for the crime of Amiriya shelter, Today in Weird History. 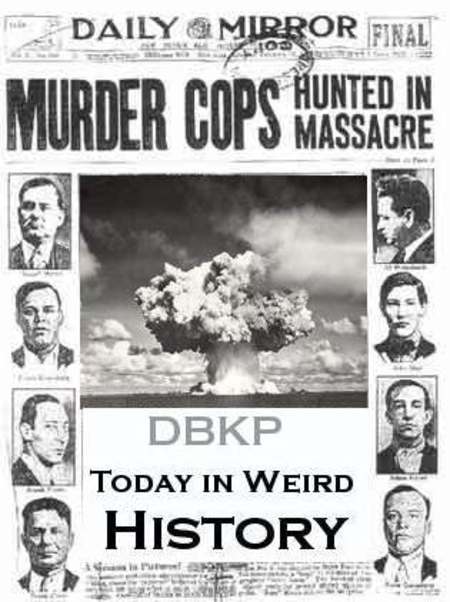 WAR!
1942 Hitler’s Operation Sealion (invasion of England) canceled.
1945 Allied planes bomb Dresden Germany; 135,000 die.
1945 USSR captures Budapest, after 49-day battle with Germany; 159,000 die.
1968 US sends 10,500 additional soldiers to Vietnam.
1991 Two laser-guided precision bombs from American bombers hit an air-raid shelter in the middle class district of Amiriya, five miles from the center of the Iraqi capital. 235 bodies were recovered within 12 hours of the attacks.
2007 With Democrats in control, House members debated Iraq in an emotional and historic faceoff over a war that Speaker Nancy Pelosi condemned as a commitment with “no end in sight.”
2003 A U.S. government plane carrying four Americans and a Colombian went down in rebel territory in southern Colombia; the executed bodies of an American and the Colombian were found in the wreckage.


DOMESTIC TERRORISTS
1974 The Symbionese Liberation Army demanded $70 of food be given to every needy Californian in exchange for the release of 19-year-old kidnapped heiress Patricia Hearst.


FIRE!
1983 : 74 people lost their lives in a movie theater fire in Turin, Italy. A combination of a stampeding crowd and the rear emergency exits being locked contributed to the deaths.


GOVERNMENT PORK
2009 The House of Representatives voted 246 to 183 for a $787.2 billion nebulous package of “stimulus” spending. The bill was known as the American Recovery and Reinvestment Act (ARRA) or Stimulus or Porkulus.


DIPLOMACY
2010 President Barack Obama has named Rashad Hussain as a special envoy to the Organization of the Islamic Conference (O.I.C.). Hussain played a key role in developing partnerships with the Muslim world.


RIGGED
2002 The French judge was accused of throwing the pairs skating decision to the Russians at the Olympics.


EDUCATION
1795 The University of North Carolina became the first U.S. state university to admit students with the arrival of Hinton James, who was the only student on campus for two weeks.


TRIALS
1633 Italian astronomer Galileo Galilei arrived in Rome for trial before Inquisition for professing belief that earth revolves around the Sun.
1935 Bruno Hauptmann found guilty of kidnap & murder of Lindbergh’s infant.
2003 Clara Harris, who’d run down her cheating husband with her Mercedes after catching him with his mistress, was convicted by a Houston jury of murder despite her claim that she’d hit him accidentally while in a heartsick daze. (Harris was sentenced to 20 years in prison.)