War Is A Crime .. Valentine's Day: A Time to Mourn 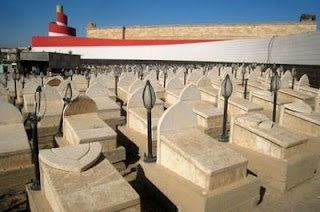 By Ray McGovern
February 14, 2011
Twenty years ago, as Americans were celebrating Valentine’s Day, Iraqi husbands and fathers in the Amiriyah section of Baghdad were peeling the remains of their wives and children off the walls and floor of a large neighborhood bomb shelter.
The men had left the shelter the evening before, so their wives would have some measure of privacy as they sought refuge from the U.S.-led coalition bombing campaign, which was at its most intense pre-ground-war stage.
All of the more than 400 women and children were incinerated or boiled to death at 4:30 a.m. on Feb. 13, 1991, when two F-117 stealth fighter-bombers each dropped a 2,000-pound laser-guided “smart bomb” on the civilian shelter at Amiriyah.
It was one of those highly accurate “surgical strikes.” The first bomb sliced through 10 feet of reinforced concrete before a time-delayed fuse exploded, destroying propane and water tanks for heating water and food.
Minutes later the second precision bomb flew precisely through the opening that had been cut by the first and exploded deeper in the shelter creating an inferno. Fire rose from the lower level to the area where the women and children were seeking shelter – and so did the boiling water. Those who did not burn to death immediately or die from the bombs’ impact were boiled or steamed to death in the intense heat.
The bombs hit toward the end of a month-long bombing campaign to “soften up” Iraq before the U.S.-led ground invasion to drive Iraqi troops from Kuwait deep into Iraq. The aerial bombing had begun on Jan. 17, 1991; the coalition flew over 100,000 sorties, dropping 88,500 tons of bombs. U.S. government documents show that the bombs were targeted on civilian as well as military infrastructure. They were very accurate.
This is not to suggest that the targeters knew that some 400 women and children would be killed at Amiriyah. No, it was just one of those unfortunate mistakes to which many Americans have become accustomed, even inured – whether the unintended-but-nevertheless-dead victims be in Iraq, Afghanistan, Pakistan, Yemen, wherever.
Indeed, the stealth aircraft and the ordnance were a proud paragon of precision performing their mission. How was the Air Force to know that the targeting information was based on spurious “intelligence” reports that the shelter had become a military command site?
Actually, U.S. Brigadier General Buster Glosson, who had overall responsibility for targeting, later commented that the “intelligence” pointing to military use was not “worth a sh_t.”
Human Rights Watch noted later in 1991:
“It is now well established, through interviews with neighborhood residents, that the Amiriyah structure was plainly marked as a public shelter and was used throughout the air war by large numbers of civilians.”
A BBC correspondent, Jeremy Bowen, was among the first TV reporters to arrive on the scene. He was given access to the site and found no evidence of military use. The Pentagon later admitted that it had known that “the Amiriyah facility had been used as a civil-defense shelter during the Iraq-Iran war” from 1980 to 1988.
So who was held responsible for this horrible “mistake”? Are you kidding? What planet did you say you were from?
A Time to Witness
In “Death of a Salesman,” Arthur Miller puts the following words into the mouth of Willy Loman’s wife, Linda — words that I believe also apply to the “small” people huddled that night in the shelter in Amiriyah:
“I don't say he's a great man. … But he's a human being, and a terrible thing is happening to him. So attention must be paid. He's not to be allowed to fall in his grave like an old dog. Attention, attention must finally be paid to such a person.”
This imperative was brought home to me when my friend Art Laffin of the Dorothy Day Catholic Worker in Washington, DC, called me on Feb. 12, 2003, as a fresh wave of “coalition” attacks on Iraq loomed. Art had visited the huge underground coffin at Amiriyah. He said: “I was there, Ray; I saw it; I talked to the men.”
Art told me of a memorial liturgy to be held in front of the White House the next day, marking the 12th anniversary of the precision bombing at Amiriyah, lest the massacre be forgotten.
“You should come with us,” said Art in his soft-spoken but prophetically challenging way.
“But I am planning to write the kind of op-ed that might inform enough people about the lies upon which a new war on Iraq would be launched that the juggernaut might be stopped,” thought I to myself. “If people only knew the truth. …”

Then Linda Loman’s
words started ringing in my ears — or perhaps they were coming from somewhere else — maybe a voice emerging out of my deep respect for the likes of Dorothy Day and Art Laffin. “Attention, attention must be finally paid.”
So there we stood marking the day, and praying that somehow future days like it could be avoided. The wind-chill factor was well below zero, so there was some solace to being put in the paddy wagon. It was my first arrest and (brief) imprisonment.
And it was exhilarating. I may be biased, given the experience of this first arrest, but if you are going to risk arrest via non-violent civil disobedience, you can’t have steadier, more prophetic companions than those of the Catholic Worker.
When we went to court for trial the new war had already begun. To our surprise, the judge announced that the arresting officer had not appeared and, thus, we were free to go. I rushed to get out the door, thinking the officer might still get there.
But Art blocked my way, turned to the judge, and asked if she would allow him to explain what we were doing on Feb. 13, 2003, and why. The crowded courtroom listened intently as Art held forth for about five minutes.
“Let’s have some coffee,” said Art as he caught up to me running down the street away from the courthouse. “Have you been able to reflect on what just happened? Do you remember how that African-American woman police officer was listening to us as we shared our hopes in the paddy wagon? Do you think she wanted her son to be recruited to serve in Iraq?
“Do you think, Ray, that non-violent civil disobedience could be contagious?”
A day or two later, a short passage in Luke’s gospel leaped out at me. Jesus of Nazareth is warning fledgling “Catholic workers” about what to expect if they remain faithful:
“Countries will fight each other … there will be terrifying things coming from the sky. Before all these things take place, however, you will be arrested and persecuted; you will be handed over to be tried … you will be brought before kings and rulers for my sake … Stand firm …
“This will be your chance to tell the Good News.”
Duh! My big chance to tell the Good News, and I’m running for the door. I was even more grateful that Art was big enough to block that door and courageous enough not to pass up this golden chance to witness — and to remind me, as well as the others, what witness is all about.
I’ve matured to the point where witnessing and risking arrest now comes more naturally … and has become even more exhilarating. On the very snowy day of Dec. 16, 2010, when 131 witnesses against war were arrested at the White House gates at a rally arranged by Veterans for Peace, 42 of us insisted on standing trial.
The authorities, though, quickly lost their appetite for trying the likes of us, most of whom have defended our country and its constitutional guarantees of freedom of speech and assembly, for “failure to obey a lawful order,” i.e. not moving, after being ordered not to remain stationary on the sidewalk in front of the White House.
The “paperwork” on us 42 had been misplaced, we were told.
As we celebrate this year’s Valentine’s Day and other holidays that stress love and peace, let’s keep in mind that more painful anniversaries must also be marked; they must be witnessed to; attention must be paid the plight of “small” people still further diminished by the euphemism “collateral damage.”
Ray McGovern works with Tell the Word, a publishing arm of the ecumenical Church of the Saviour in inner-city Washington. He served as a CIA analyst and Army infantry/intelligence officer for almost 30 years, and is co-founder of Veteran Intelligence Professionals for Sanity (VIPS).
This article originally appeared at Consortiumnews.com.
مرسلة بواسطة سحاب Sahab في 5:16 م